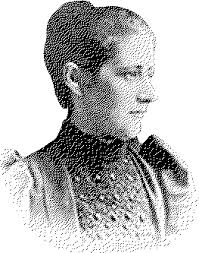 Beatrix Potter has delighted generations of children with her animal stories, including
“The Tale of Peter Rabbit.” But this is not the fame nor the career she would have intended.

Born in 1866 of wealthy parents, Helen Beatrix Potter
spent much of her childhood alone with her pet
animals. Her father, educated as an attorney, spent
more of his time in exclusive clubs than practicing
law. Her mother spent her days as a socialite.
Bertram, her younger brother, was sent off to an
expensive boarding school and was seldom home, while
Beatrix received most of her education at home from a
succession of governesses.

Beatrix spent many hours observing and drawing
pictures of her childhood pets, particularly her two
rabbits, Benjamin and Peter. Her actual interests were
far more serious; she had a passion for science.
Beatrix preferred to spend her hours observing fungi,
algae and lichens through her microscope and recording
the images in watercolor paintings, as was the custom
of the day before photography became widely available.
Her uncle was impressed with her work and nominated
her as a student at the Royal Botanical Gardens at
Kew. Her application was summarily rejected because
she was female. Her parents discouraged her from
pursuing an “inappropriate” career in science, as they
saw only frustration and disappointment in it.
Instead, they set Beatrix in charge of running their
household.

Even while sharing her time with the administration of her parents’ substantial household affairs, Beatrix continued to spend hours observing algae, spores and fungi, and producing hundreds of richly detailed watercolors. Through her illustrations, she because well respected in the scientific community, but remained unwelcome in the Linnean Society meetings based on her gender. In the early years of the 1900s, Beatrix tried a new venture. Now in her thirties, she began reaching back to her childhood memories of her animal friends, telling her now-famous “Tale of Peter Rabbit,” which she also illustrated in her watercolors. The economic success of this and her subsequent works provided Beatrix with a source of income independent from her parents’ money. Beatrix was 36 years old when the first of her enchanting animal stories and illustrations was published in 1902.

But her new-found success was to be cut short.
Her writing and illustrations began declining, fading
with her failing eyesight. Increasingly unable to
write or draw, Beatrix moved to the Lake District of
Sawry, England where she had been investing much of
her royalty income into buying land for farming and
conservation. She married in her later years but
remained childless.

Some reports of her later years in the Lake
District describe a woman of some bitterness. Her
first career choice had been denied her because she
was a woman. Turning to an alternate career, she
received acclaim for her children’s stories, only to
have this success cut short by poor eyesight. Beatrix
may have been despondent about this latest twist of
fate but she was not to be defeated. As she gave up
writing, she increasingly turned her attention to her
home, her marriage and to sheep breeding. Her
indomitable spirit showed through again and, in her
sixties, she was elected by her peers to be the first
woman president of Herdwick Sheep-Breeders
Association.

By her death in 1943, Beatrix Potter Heelis had
amassed an estate of 4,000 acres. In her will, she
donated her land to the National Trust, now part of
the Lake District National Park.