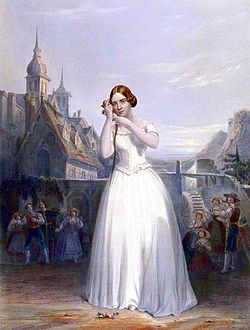 Jenny Lind was born in Stockholm, Sweden, in 1821, the daughter of a teacher of languages. She is said to have been able to repeat a song that she had heard but once at the age of three. At ten years of age she sang children parts on the Stockholm stage. After turning 12 years of age, her upper notes lost their sweetness, and for four years she did not do much singing. Her love for music continued and these years were devoted to the study of instrumental music and composition.

At the end of this period her voice had recovered its power and purity and for a year and a half she was the star of the Stockholm opera. Next, she gave a series of concerts to obtain the means to go to Paris for further study, but the French teacher did not appreciate her powers and Jenny returned to her native city.

When she was twenty-three years old, Jenny went to Dresden and when Queen Victoria visited that city the following year, she sang at the festivals held in the queen’s honor. This opened the way to astonishishing success in other German cities. In 1847 she went to London and was enthusiastically received. Here she sang for the first time in concert.

Because of the influence of P.T. Barnum, Jenny Lind visited America in 1850. Because of his great influence and his power as an advertiser he roused the wildest enthusiasm. Tickets sold for fabulous prices in New York. But she did not disappoint the wildest expectation.

She subsequently married Mr. Otto Goldschmidt of Boston, a musician and conductor. After her marriage, she appeared on the stage only at intervals and usually at concerts given for charitable causes. She was deeply interested in these charitable causes and we can easily add to her title of singer that of philanthropist.

Her later years were spent in London where she died in 1886. Her life and songs are a sweet memory.